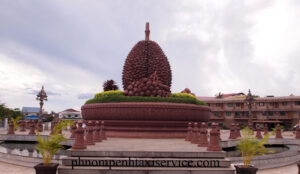 Kampot Province (Khmer: ខេត្តកំពត, [kʰaet kɑmpɔːt]) is a province (khaet) in southwestern Cambodia. It borders the provinces of Koh Kong and Kampong Speu to the north, Takeo and Kep and Vietnam to the east, and Sihanoukville to the west. To its south, it has a coastline of around 45 km on the Gulf of Thailand. It is rich in low arable lands and has abundant natural resources. Its capital is Kampot town.