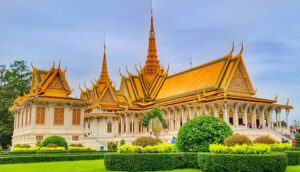 The Royal Palace is a complex of buildings that serves as the royal residence of the King of Cambodia. Its full name in Khmer is the Preah Barom Reacheaveang Chaktomuk Serei Mongkol (Khmer: ព្រះបរមរាជវាំងចតុមុខសិរីមង្គល). The Cambodian monarchs have occupied it since it was built in the 1860s, with a period of absence when the country came into turmoil during and after the reign of the Khmer Rouge.

The palace was constructed between 1866 and 1870 after King Norodom relocated the royal capital from Oudong to Phnom Penh. It was built atop an old citadel called Banteay Keo. It faces approximately East and is situated at the Western bank of the cross-division of the Tonle Sap River and the Mekong River called Chaktomuk (an allusion to Brahma). 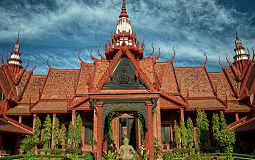 The National Museum of Cambodia (Khmer: សារមន្ទីរជាតិ, Sarămónti Chéat; French: Musée national) is Cambodia’s largest museum of cultural history and is the country’s leading historical and archaeological museum. It is located in Chey Chumneas, Phnom Penh. 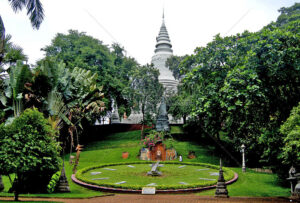 Wat Phnom (Khmer: វត្តភ្នំ, romanized: Voăt Phnum; “Mountain Pagoda”) is a Buddhist temple (wat) is a pagoda that symbolizes the name of Phnom Penh, a historical site in the record of Khmer national identity. Wat Phnom Doun Penh has a total height of 46 meters equal to the height of feet (150ft).[1] The pagoda is named after grandmother “Daun Penh” who has the story of the discovery of the four statues: one Vishnu statue and four buddhas statues.

Traveler pickup is offered
Your hotel in Phnompenh

For a full refund, cancel at least 24 hours in advance of the start date of the experience